You are Here: Home » News » Sport News » Olympic boxer returns to Rochdale home club to inspire the next generation 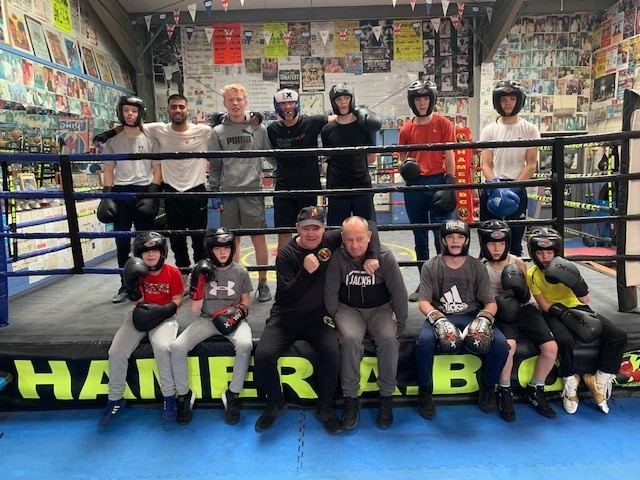 Taylor, who was a Hamer boxer during the 1980s, entered the gym after many years of absence to participate in some bag work, whilst demonstrating how to get inside the opponent’s guard before unleashing combination punches to both the body and head.

Hamer coach Steven Connellan said “We were honoured that Kevin came back to the gym again. His visit gave me an idea, which is to contact all of Hamer’s former boxers for a social gathering.”

Hamer boxer, Mahbub Miah, 20, said: “I have seen articles and pictures of Kevin upon the walls of our gym every time I come to work out, but to actually get an opportunity to meet him and get a picture taken alongside of him was awesome.”

And on leaving the gym that day, 11-year-old Conner Middleton shouted out for all to hear: “I’ve just met an Olympic boxer from Rochdale!”

Taylor was a National ABA Finalist, when he lost a controversial decision against Scotsman Peter Bradley at the Empire Pool in Wembley in 1983. That same year, he went on to win the Copenhagen Box-Cup Final with a win over J Cronroos of Finland, before going on to stop Paul Moylett in the third round, winning the ABA National final a year later in 1984.

The Olympic selection team couldn’t overlook him when he beat J Kilroy of Ireland and A Sliwinski of Germany when representing England: because of this, Taylor became the first and only boxer to date from Rochdale to be picked to represent Great Britain in the featherweight division at the 1984 Olympic Games in Los Angeles.

In the opening bout Taylor beat Jonathan Magaula of Switzerland, before receiving another very controversial decision against him, when the Korean Hyeong-Oc- Park was awarded a split-decision.

The British boxing team immediately criticised the verdict and as they demonstrated, they said that the Korean boxer should have received a standing eight count in the second round and that Kevin easily won all three rounds.

Not long after the Olympics Taylor turned professional where he succeeded in winning the British Boxing Board of Control, Central Area Super-Featherweight title, when he came in as a last replacement to beat Les Walsh at the Civic Sports Centre in Oldham in 1987.

This was Taylor all over: he would step into the ring as a late replacement on numerous occasions, which was always on his opponent’s doorstep, but it wasn’t long before Kevin dragged them into his own back yard as he unleashed devastating punishment.

In turn, this gained him the opportunity to challenge the British featherweight champion Peter Harris at Afan Lido, in Port Talbot, Wales in February 1988. Harris started the bout well and he gained the early rounds, but as the rounds progressed, Taylor began to take control. But it was too late to gain victory and the Welshman was awarded the win on points. Had it been fifteen rounds like in the old days then Kevin might have gained victory, but it was not to be.

Because Taylor put in a terrific performance against Harris, he was awarded an opportunity to challenge the future WBC World featherweight champion Paul Hodkinson, for the British Featherweight title that same year in December. Hodkinson was to become a rising star in British boxing after he beat Peter Harris to gain the British crown.

Taylor was at the end of his career and if truth be known he should have never stepped into the ring again, but he fought Hodkinson at the Sports Centre in Kirkby, Liverpool only to be beaten, which ultimately led him to retire from boxing for good.