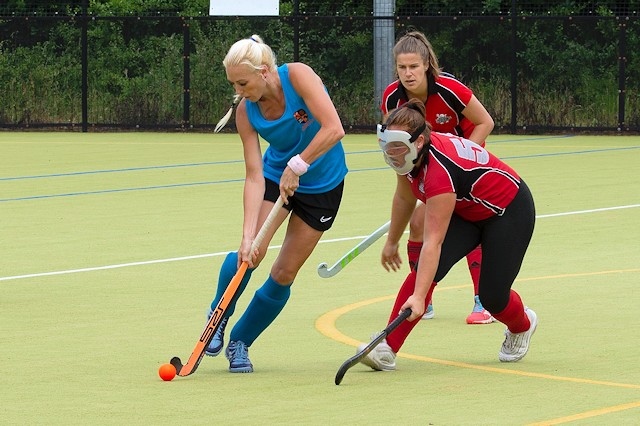 Timperley started as the aggressors, driving the play deep into Rochdale's defensive territory and holding it there. Collinson and Owen worked together to channel them out down the left wing before finding a gap to pass the ball into the midfield. Timperley closed ranks and were able to tackle for the ball, but Brammer was ready at the top of the D to hold them off, swiping the ball and hitting it down the field.

A couple of short corners were awarded to Timperley, the first was seen off by a strong run out by Collinson interrupting Timperley's set piece, the second was stopped by an excellent save from Partington. Another run on Rochdale's goal by Timperley was almost channelled out by Knowles only for Timperley to find a pass around. Brammer was waiting for them, blocking their route into the D and forcing them to try and switch the play across.

Timperley took advantage of their fitness to crowd the D, but Partington made a brilliant save to deny them a goal, and Owen swept it off the sideline to allow Rochdale time to regroup. Unfortunately an injury saw Knowles go off the pitch once the ball was out of bounds.

A scrappy goal from Timperley broke Partington's streak of saves and put Rochdale on the back foot. Newton drove the ball up the left wing, passing it off to Yates near the baseline. With a line of Timperley defenders in front of her Yates pushed the ball to McDonald at the top of the D, who hit it back to Palmer in an open space in the midfield. Palmer turned and spotted Parton making a run towards the right wing and made the pass diagonally across, unfortunately a few paces too far in front of Parton for her to reach.

When Timperley intercepted a long pass across the midfield, Burrell ran in to steal it back, an efficient jab tackle letting her regain possession before hitting it across to Richardson. Richardson cut past a Timperley defender to reach Hodcroft who received the ball for a shot on goal, but the defence were able to prevent her from getting an angle and her shot went wide.

Throughout the match so far Timperley had been running an overload for when they made a break for goal, this tactic finally paid off when they were able to pull the Rochdale defence to one side as they tried to mark out players, leaving room for a midfielder to run into the fray and pick up the ball for a second goal.

As the second half got under way it was clear that Rochdale were not going to roll over and give up. A series of quick passes from McDonald to Pickering, to Hodcroft and back to Pickering saw Rochdale around a significant chunk of Timperley's midfield. Pickering ran down the wing before giving the ball to Parton who tapped it back to Hodcroft to drive it into the D. She crossed it to Burrell but the keeper saved the shot. Pickering intercepted the ball on the right wing, passing it off to McDonald in the centre who found a route forward to Hodcroft. Hodcroft weaved her way up towards the baseline in the right corner before hitting it across and into the D. Burrell was there to collect it, but it came off the Timperley defence, Yates and McDonald had run in to help and McDonald was able to claim the ball and tap it down the far post to score a goal for Rochdale.

Timperley managed to make a few attacking runs, but Rochdale were now tracking back as a team giving themselves more time to keep composure on the ball, giving themselves time to find a way through the Timperley attack instead of giving the ball away again too quickly. Collinson and Palmer were able to channel the runs down the wings, leaving Brammer and Owen free to block any impending passes to keep the ball mostly around the edges of the D to minimise any trouble for Partington.

A free hit from Owen found Newton on the left wing, who hurtled up the pitch before giving the ball to Yates to avoid a Timperley defender. Yates shadowed the baseline into the D only to be blocked by the defence, she was able to feint her way out of the first tackle, but the second got the better of her. However, she jabbed her stick straight back in there to win the ball back before trying her luck with a shot, only to be denied by the keeper.

With Rochdale now in control of the play they were able to win a series of short corners, in which Hodcroft, Collinson and Burrell all came close to scoring, but the Timperley defence and keeper rallied effectively each time. Hodcroft won the ball in the centre ground and tapped it back to McDonald, who hit it up the right wing to where Richardson had found a bit of open space. Richardson ran onto the ball and drove it up the pitch before cutting in towards Timperley's D, dodging the defence as she did before taking a shot at goal, that skimmed down the wrong side of post.

Captain Becky Knowles said: "To lose 2-1 against Timperley is a result in itself and to lose by 1 goal is outstanding. We are confident we will have them next time.”