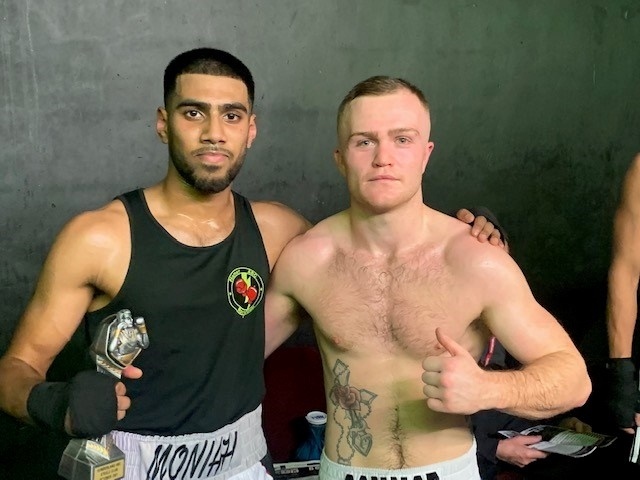 Mahbub Miah on left and Connor Samms on right

After a last-minute call, Mahbub ‘Real Money’ Miah trekked all the way to Steels Club in Sunderland on Friday 29 October to take on two-time national champion, Connor Samms of Northumberland Fire and Rescue Boxing Club.

The bell rang for the first round and the Hamer boxer came out throwing swift jabs and solid right hands at his oncoming opponent. This continued throughout the round, with Mahbub landing crisp punches, as Samms continually stepped forward to unload punches of his own to both the body and head of the Hamer boxer.

Before the start of round two, Mahbub was told by his coach Steven Connellan to continue to use his jab, but try and put his weight onto his back foot to land a heavy right-hand to the chin of his on-coming opponent.

It was at this point that the Hamer boxer began to land continuous counterpunches to both the body and head of his oncoming opponent.

But as the round progressed, Samms began to connect with punches of his own when Mahbub decided to stay still to trade punches with him, instead of moving off and using the ring.

At the start of the third and final round, both boxers met in the middle of the ring to continuously trade successive punches upon each other. Although the Hamer boxer continued to hold his own with the Sunderland warrior, it was a mistake in tactic which gave Samms a chance to impress his crowd.

Samms unloaded a constant barrage of non-stop punches upon the Hamer boxer, who stayed steady whilst replying with constant punches of his own.

It was a very close bout that could have gone either way, but the Sunderland boxer pleased his crowd when he had his arm raised in victory via a split-decision.