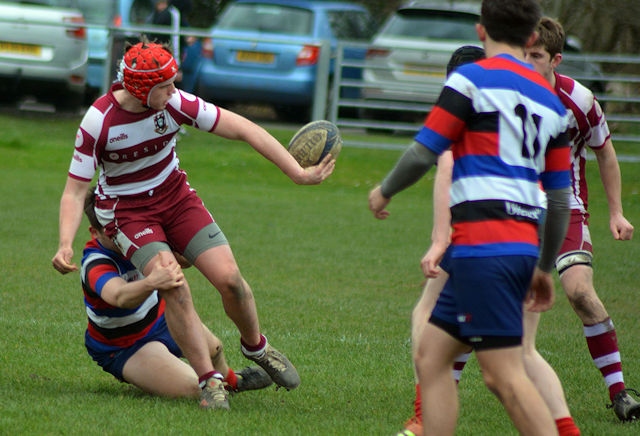 Out the back by Sunderland

The league season is slowly coming to a protracted conclusion after various rearranged fixtures to cover recent cancellations.

The outcome for Rochdale Junior Colts has been distilled down to two games against Liverpool Saint-Helens. The first of which saw them travel to Moorgate Avenue.

LSH have several players in the Sale Academy and Sunday's fixture unfortunately clashed with Sale taking on Exeter. The upshot was LSH travelled to Moorgate Avenue with only 11 men.

However, Rochdale were happy to loan players and this allowed a full 15-aside match to take place which both sides should be credited for.

The pitch was firm and Rochdale chose to play with the wind in the first half.  Rochdale exerted the initial pressure, but a succession of errors and penalties stifled their momentum.

This set a pattern for the match which saw Rochdale play some open attractive Rugby but either force the final pass or infringe the laws as a result of their over eagerness at the breakdown. That said, Rochdale’s defence was rock solid as it has been all year and they were able to snuff out any potential threats from the LSH attack.

Eventually a wayward goal-line drop out landed in the hands of Olly Mills who was 15 meters from the try-line. Mills was able to beat a couple of defenders and scored next to the posts (7-0).

Rochdale were soon on the attack again and just failed to ground the ball in the left-hand corner.  Advantage was being played and, from the subsequent penalty, Garrett Myers took the pass and bulldozed his way over from close range (14-0). There was time for one more try before half time.

A scrum 10 meters out gave Mills the opportunity to pick up and carry a couple of defenders over the line with him to register the score (19-0).

The second half continued as the first had ended with Rochdale dominating territory but allowing the visitors easy exits from their own half with more penalties.

Eventually the referee’s patience was exhausted and he sent one of the Rochdale players to the bin for 7 minutes.

Rochdale didn't let this upset their defence and were able to manage the yellow card without conceding any points.

Eventually Rochdale got back to business as a cross-field kick by Mitch Holt was gathered by Gabe Fraser on the left wing. Fraser drew the last defender and fed the ball inside to Nick Wright who crossed out wide (24-0).

Straight from the kick off Rochdale showed what they are capable of.  Fraser started the move by gathering the restart and beating the first defender. The ball was passed to Myers on the outside who accelerated into the open space.

Myers’ inside pass found Fraser backing up who, in turn, fed Holt. Charlie Bleackley was in support to take the next pass and gallop over from 20 meters out (31-0).

There was just time for a final try. From a lineout, Will Rawlinson at scrum half made the break and offloaded to the ever-present Mills who cantered over to complete the scoring (36-0).

Despite the stop-start nature of the game there were lots of strong performances. Myers, Mills, Jacob Jackson and Alex Barry worked tirelessly to keep Rochdale on the front foot. Will Simmons, Rawlinson, Tom Shaw and Fraser were excellent in both attack and defence.

MoTM went to Ben Sunderland who was effective at turning over and slowing the ball down at the rucks, acting as distributor in the mid field and managing both the team and referee when discipline began to slip.

It was a strange and rather disjointed performance but it was one of those days where the result was probably more important than the manner of the win.

Rochdale are now within touching distance of the league title and, if they can avoid defeat in either of their remaining games, the title will be theirs.

The return fixture next week will prove a sterner test with LSH at full strength but it’s a challenge Rochdale are looking forward to.