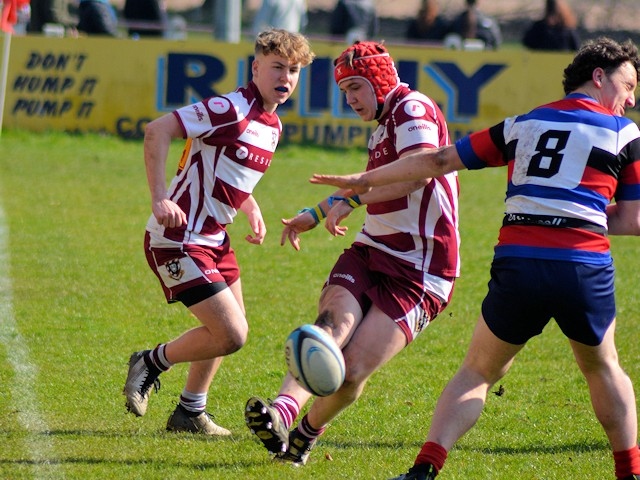 Rochdale travelled to Liverpool St Helens (LSH) for the return fixture from the previous week but this time it was Rochdale who were below full strength due to injuries and absentees.

The game was more evenly matched than the first encounter with neither team able to exert dominance. LSH spent the majority of the time in the Rochdale half using the wind to pin Rochdale back, but the Rochdale defence held firm. The game began to turn towards the home team after Rochdale lost a couple of players to injury and right on half time LSH were able to capitalise on a loose clearance, gathering the ball and scoring from the counter attack, 7 - 0.

After the break Rochdale played with the wind at their backs and were confident this would give them good field position to attack the LSH back line. Unfortunately, these plans began to unravel when three injuries in the third quarter resulted in players having to leave the field and their replacements playing out of position.

The disruption stifled Rochdale’s attacking edge and gave LSH the opportunity to push for the decisive score. To their credit Rochdale were still in the game and created several opportunities but were unable to convert. LSH began to come more into the game but the Rochdale defence held firm until close to the end of the match when the LSH scrum half received quick ball in the Rochdale 22 and sped through a gap to score, 14 - 0.

You learn a lot about a team when they have their backs to the wall and to a man the Rochdale players stepped up in this game. Alex Barry and Ben Hankinson were excellent in the lineout and at the breakdowns. Joel Rigby and Sonny Joyce brought energy to the pack. Declan O’Loughlin was immense carrying into contact especially on his first game back after injury. Jacob Jackson tackled and carried with great power all over the field. Behind the pack, Will Rawlinson had another excellent game at scrum half. Will Simmons, Tom Shaw, Nick Wright and Ben Kershaw were rock solid in the midfield. Gabe Fraser, Max Cooper and Ollie Simpson built up good attacking positions from the back field. Although this was not the result that Rochdale wanted, their performance was outstanding.

After the game, news came from the league that Rochdale's remaining postponed games had been declared draws, meaning the team had clinched the league title.

The team are now entered into the League Cup which runs until the end of the season and they are also competing in the Lancashire Cup final on Sunday 24 April to try to achieve the league and cup double.