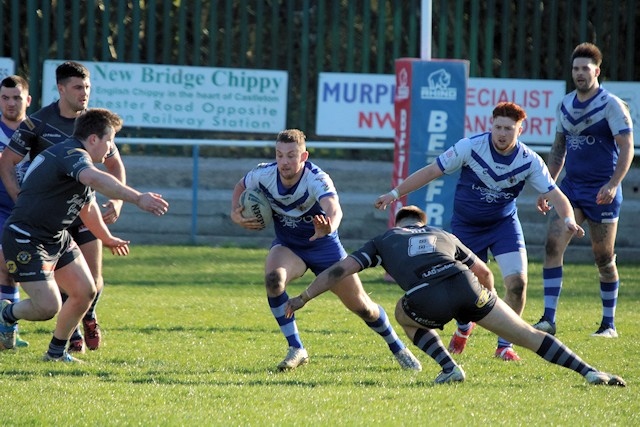 Mayfield coaches Sam Butterworth and Steve Wood knew their team would be up against it on Saturday (26 March) before they set off for the three hour trip to Wath Brow.

With six enforced changes from last week it was always going to be a tough ask to come back from Cumbria with anything other than bumps and bruises. Mayfield held out for the first 15 minutes of the game but it always looked on the cards that they would be outclassed on the day. The lads gave their all in a hectic first half and to their credit managed to keep the score down, 16 - 0 at half time wasn't too bad under the circumstances. Darcy Maroske, Nick Hargreaves and James Mulvaney pulled out all the stops, but it wasn't enough.

Wath Brow came out in the second half firing on all cylinders and completely overran the Rochdale outfit. Try as they might, Mayfield couldn't get over the line. Cole Connolly did his best to inspire his side and Si Moore, Lewis Butterworth and James McDaid rose to the challenge but they were repelled at every opportunity. Brow ran in 32 unanswered points in the second half and there wasn't much Mayfield could do to stop them.

There isn't really a lot to say about a game like this except maybe, Mayfield must do better. The players who turned out cannot be faulted under the circumstances and the coaches know that there are players waiting in the wings to come in once they able. All that said, Mayfield won't be too deterred by this performance and result. They will put it behind them, take any positives they can and build on them in preparation for next week at home to Hunslet.