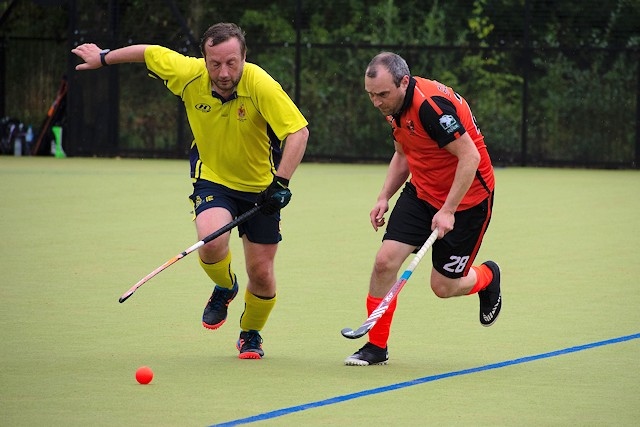 Richard Saggerson was named man of the match

This Saturday (26 March) was Rochdale Men's 2nds' last home game of the season, which was against Didsbury Men's 5ths. It was a bright sunny Saturday morning and Rochdale were hoping for a good game.

Rochdale were forced to field a back three due to only having three defenders. The match started well, with both sides looking to gain control of the game but it would be Didsbury who opened the scoring. With clever play, they forced the ball down the wings to the baseline, then worked it back up to the top of the D for a shot at the goal. It was blocked by a flat stick but the away team had luck on their side as the ball flew up in the air to a Didsbury forward who hit it in on the volley from near the back post to give them the lead.

It would not take Didsbury long to find a second either. After pushing Rochdale back to the 23-metre line, they played it back to the halfway, before finding a forward near the top of Rochdale’s D. He held it up before firing a hard cross to another forward who had run through into the D, who deflected it into the home team’s goal.

The game was starting to look beyond the home team now, but the lads dug in deep and started defending better. Rochdale also managed to win a few penalty corners but were unable to convert them. They were definitely starting to look stronger as half time rolled around. The teamtalk was largely positive and it was agreed Rochdale needed to push up higher and take the game to Didsbury.

It started better than the first half with Rochdale pushing Didsbury deep into their own half. Chances started opening up and belief started to grow. Even when Didsbury did manage to counter, they were denied at least four certain goals by some excellent tackles from the man of the match Richard Saggerson and the must be seen to be believed Dave Marlow. With chances coming for Rochdale and strong defensive performances it looked for a while like they might get back into the game.

However, it was not to last. Teams with the pedigree of Didsbury don’t miss chances forever and started to get their ruthless passing in the final third sorted and there was nothing the defence or goal keeper could do to prevent two tap ins and two good shots with just the keeper to beat. It may have been different if Rochdale had found a way to nip the counter attacks in the bud, but once Didsbury’s midfield had the ball facing the home team’s goal, they simply had too many options and too much space, leaving the defenders with no chance.

Rochdale did have possession and did create chances but against a tight defence content to hit on the counter, they just couldn’t find a way through. A goal was almost scored from a fierce shot by Josh Robinson but the keeper proved equal to it.

Another tough day at the office for Rochdale as the season draws to a close. The lads showed good spirit and kept trying to find a way to win the game. In parts, Rochdale made some good passing moves, but at the end of the day they were beaten by a well drilled side who were just better on the day.

It’s almost certain that the men's second team will be relegated but it is still dependent on the results in other games next week.

Man of the match was Richard Saggerson for a solid performance and some tackles that even Neo couldn’t pull off in the Matrix films.