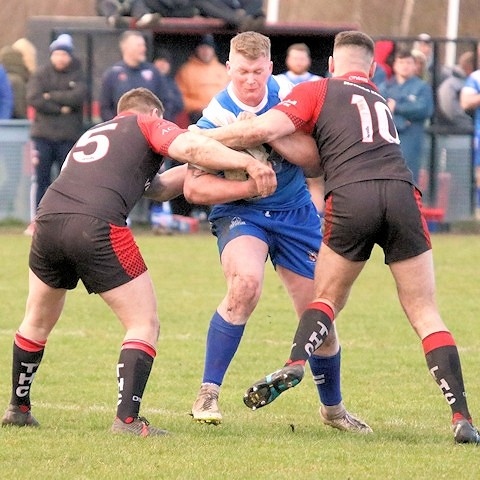 Mayfield made the trip to St Helens on Saturday 14 May full of confidence and probably their strongest side of the season.

After a successful change in the training regime, coaches Sam Butterworth and Steve Wood must have thought that this was going to be their day.

The first half of this game belonged completely to the Rochdale outfit as they played some brilliant rugby league. Dec Sheridan, Ben Ratu and Fin Stewart looked threatening every time they touched the ball, while Si Moore and the returning Jimmy Connaughton worked tirelessly driving in ball after ball and matching each other in the tackle. As they battered holes in the defence chances started appearing but it took 25 minutes before Nick Hargreaves powered his way through to open the scoring, Cole Connolly converted, 0 - 6.

Within 10 minutes, Reece Hamlett had added another which Connolly also converted, 0 - 12.

All was going to plan, so far so good. 12 points up at half time and Mayfield were in control. The second half showed Mayfield's frailties and the mistakes began to creep in with lost ball and penalties. Thatto cut the gap with a well taken converted score but Mayfied fought back, Darcy Maroske and Dan Dean pushed forward and Harry McDonald sneaked over from halfback for a try, converted by Connolly, 6 - 18.

That was it for Mayfield. Their input into the game lessened and Thatto's increased at the same rate. They ran in a further four tries all but one of which was converted, final score 28 - 18.

The way the team fell to bits in the second half suggests a lack of fitness but the standard of rugby played in the first half shows that this side certainly has it in them to compete at the highest level and as training improves now they most certainly will.