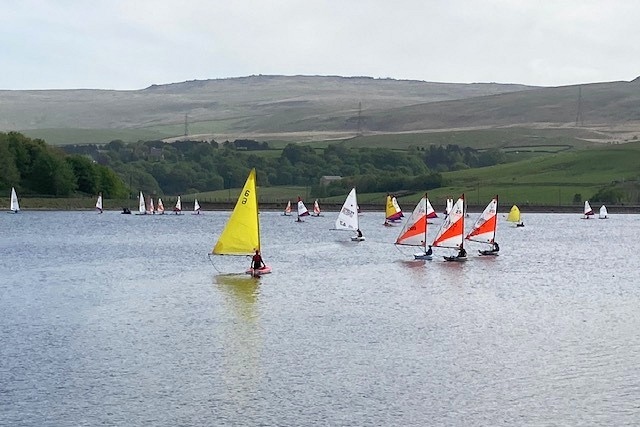 There was an active weekend at the lake the weeeknd of 14/15 May with events on both days. On Saturday 14 May, the club hosted a round of the North West Junior Travellers races. 30 young sailors, in single handed dinghies raced in bright sunshine with a light and often fickle westerly wind. It was a colourful sight as many of the sails are not the usual white colour.

Competitors came from all parts of the region, with Ullswater in the north, bringing a team of 7 youngsters, Combs and Glossop in Derbyshire, and Southport to the west. Sailors were ranked by age group as well as producing an overall result on handicap. The overall winner, and under 16 years age, was George Jacobs from Combs in a Byte dinghy, followed by Oliver Hirst from Scammonden in a Laser, with local Jacob Din (also Laser) third. The Under 14 category was led by local Millie Hayfield in a Topper who finished fourth overall. The under 11 years age group was won by Freya Antonelli from Budworth, also Topper, who was sixth overall.

This was a great and successful day for all with parents watching.

On Sunday 15 May, in very different conditions with a strong easterly wind blowing, 21 Laser dinghies raced in an Open event. Lasers have the option of three different sized sails to use and the results were based on handicap. Normally, the keen racers would use the standard sail. Those who chose to do so found it likely to lead to a capsize and they suffered in the results. The best result achieved with this standard sail was 10th overall. The two leading sailors chose an intermediate (radial) sail, while third placed overall, Daisy Fisher, used the smaller 4.7 one.

The capsizes were sudden and dramatic in the first and second races. The first race was won by Ian Jones from Dovestones, an experienced previous winner of the event. Local youngster Daisy Fisher came second, and local Richard Marsh, usually noted for sailing a RS400, came in third. The second race saw a closer finish between the two leading boats with Ian Jones holding off Richard Marsh and Daisy Fisher coming in third. Having won the event, Ian Jones decided not to sail the third race. This left Richard Marsh to win by a large margin with Daisy Fisher runner up and another young sailor, Oliver Hirst from Scammonden Water in third place.