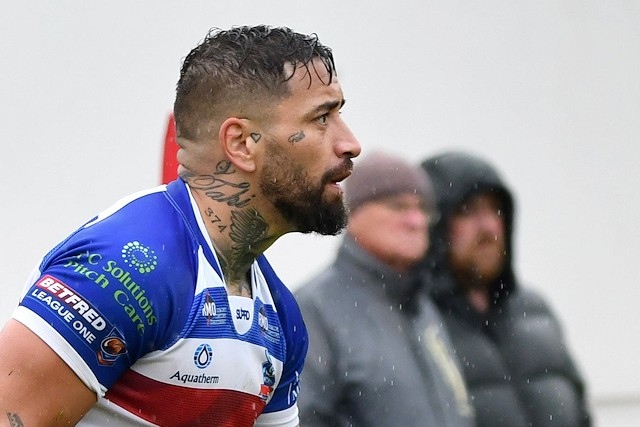 Rochdale Hornets were again left to rue ill-discipline, and handling errors, as they slipped to a 34-14 defeat against Swinton Lions on Sunday 12 June.

Coming into the game, there was nothing to separate the two sides in the table but the hosts controlled the Round 10 clash - and were fully deserving of their eighth league win of the season.

The Lions asserted themselves in the game early with Louis Brogan scoring the opening try, after just seven minutes.

Outside of Brogan’s try, it was an opening quarter littered with errors as both sides struggled to complete sets.

However, some quick thinking from George Roby extended Swinton’s lead after 22 minutes.

A sharp burst, from dummy-half, left the Hornets defence trailing and the hooker went through to score under the posts.

Rangi Chase then came to the fore to help reduce the deficit.

After a set restart, the former England international produced a mind-blowing offload to put halfback partner Lewis Sheridan in for a vital try.

Sheridan would convert his own try to bring the score to 12-6.

But, repeated penalties allowed Swinton to surge back up the field and referee Michael Mannifield sent Gregg McNally to the sin bin for an infringement on his own goal line.

Dan Abram slotted the resulting penalty, before Rhodri Lloyd powered over for a crucial try on the stroke of half time.

Matt Calland’s side started the second half brightly with Gavin Bennion and Paul Brearley beginning to find holes in the Lions defence.

Then, some more sharp play between Sheridan and Chase set Rob Worrincy free in the corner - who raced in for his first Hornets try.

The winger found Lewis Hatton with a short pass and was left with an easy run-in when he received the ball back off his teammate.

Hornets hit back on the hour mark, again through Worrincy, after McNally picked out the veteran winger who finished superbly in the corner.

Despite several more visits into the Lions’ 20, Hornets couldn’t find a fourth try to put further pressure on their opponents.

A forward pass just metres from the Swinton line handed possession back to the hosts, and before long they’d won a penalty deep in Hornets territory.

Abram took the two points on offer to make the score 28-14 with five minutes remaining.

Mitch Cox would then go on to seal the victory when he took Lewis Else’s pass at speed, to go in under the posts.

The defeat is Hornets’ third in Betfred League 1, all of which have come against the three teams currently above them in the division.

Matt Calland’s side will be hoping to get back to winning ways when they make the trip to Hunslet on Saturday 25 June (3pm kick-off).