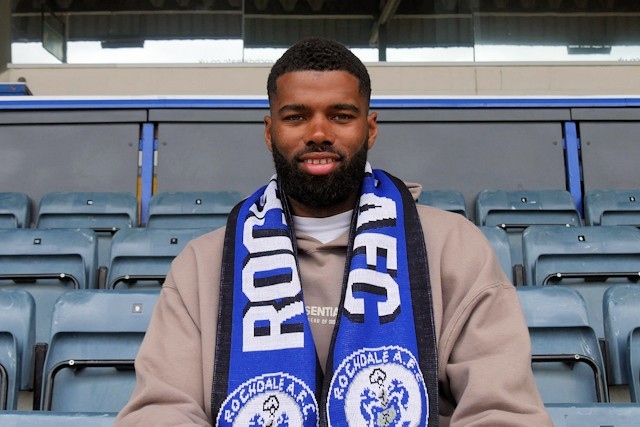 Defender Ethan Ebanks-Landell has signed a two-year-deal with Rochdale AFC.

The the 29-year-old previously spent the second half of the 2018/19 season at Dale, on loan from Wolverhampton Wanderers, during which he made 16 appearances, scoring two goals.

“I really enjoyed my time when I was here before and hopefully I’ll enjoy it again.

“After speaking to the manager, his demeanour and the way he wanted to play all fitted in with what I want to do. He was a breath of fresh air.

“I can’t wait to get back in for pre-season.”

Ebanks-Landell signed professional terms with Wolves in 2010 after coming through the club academy system. He went on to make 50 appearances for the side. He also went out on loan to Bury, Sheffield United and MK Dons, as well as Rochdale, during his time there.

Following his departure from the Premier League side in the summer of 2019, Ebanks-Landell went on to join Shrewsbury Town, where he has spent the last three seasons, notching up over 100 appearances. He captained the Shrews during the 2021/22 campaign, having previously been vice-captain.

Manager Robbie Stockdale added: “We fought off a lot of competition to get Ethan. Following on from the signing of Richard O’Donnell, he is also a very experienced player who knows this level and above, so that's really pleasing.

“We’re close with several other players and I’m hoping that we can get a couple more in before pre-season training starts next week.”