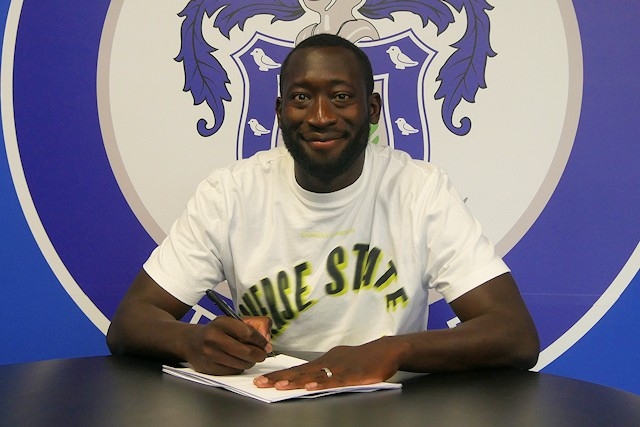 He has most recently enjoyed success with Morecambe, making 89 appearances in the past two seasons. After winning promotion to League One in 2021, he was part of the side that helped keep the Shrimps in the division on the final day of last season.

“I met the manager last week and I was eager to get it over the line, so I’m happy to be here now,” said Diagouraga.

“When I met him [the manager], I was very impressed with his ideas and how he wants to play. He really sold the club to me and I wanted to play for him.

“I had two-and-a-half years at Morecambe and really, really enjoyed it, so hopefully I can bring some experience here and try to bring some success.

“I’ve come here to play games. I know it’s a squad game but I’m still hungry and I want to do well.”

Diagouraga started his professional career at Watford in 2004 and spent four years there. Spells at Hereford United and Peterborough United followed, before he joined Brentford in 2010 for a fee after a successful loan at the Bees.

He made nearly 250 appearances at the London club over six years, during which he was part of the side that won promotion to the Championship in 2013/14. He was almost an ever present in the side the following season, as Brentford made it to the play-off semi-finals.

From there, the Frenchman went on to join Leeds United, again for a fee, at the end of the campaign, before stints at Plymouth Argyle, Fleetwood Town and Swindon Town followed. He joined Morecambe in January 2020.

Manager Robbie Stockdale added: “I’m very pleased to get somebody who played over 40 games in League One last year.

"It was clear when reviewing last season that we missed somebody like him in the middle of the pitch, and this signing will add leadership, experience and quality.”