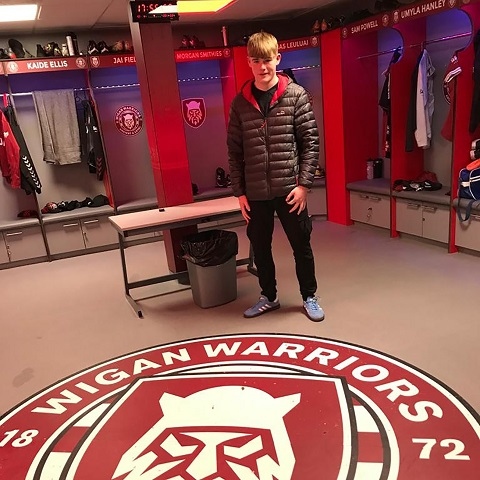 A rugby career could beckon for 14-year-old Noah Wilde after he was scouted by Wigan Warriors Rugby League Club while playing for Rochdale Mayfield.

The Whitworth Community High School student, who has been playing the sport since he was 10, is now hoping that Wigan, which has a great reputation for encouraging youth into the sport, will help him realise his dream.

Noah, from Whitworth, said: “I have played football from about three but stopped when I moved house.

“My stepdad then got me into rugby and took me to a game and I really enjoyed it. I played for Rochdale Rugby Union, then I started to play rugby league with Waterhead Warriors in Oldham”

For the last season, Noah has been playing as a loose forward for Rochdale Mayfield in Castleton because it was a bit closer to home.

He said: “It has been good there and our coach tipped us off to say there would be scouts watching us play and I got scouted.

“I was watched throughout the game and, at the end, they sat me down with my mum and dad and said that I could go to a couple of training sessions with Wigan Warriors and from there I got picked.

“I now go every week on a Monday and Wednesday evening and I hope to get a scholarship for the academy and to play for the first or second team.”

He admitted it was a surprise to find out he had been selected and said: “You don’t really think it is going to happen to you. The scout told me to keep on enjoying my rugby and he would be interested in seeing what I could do in the future.

“I know that they also look at your behaviour, both on and off the pitch, including at school.

“I think this will be a turning point for me, both for how I am at school and in my life. I realise I have to be at my best in school because this is a real opportunity for me.”

Noah said his parents were excited for his future and wanted him to do well. He intends to work hard and hopefully secure a scholarship with the Wigan Warriors Academy.