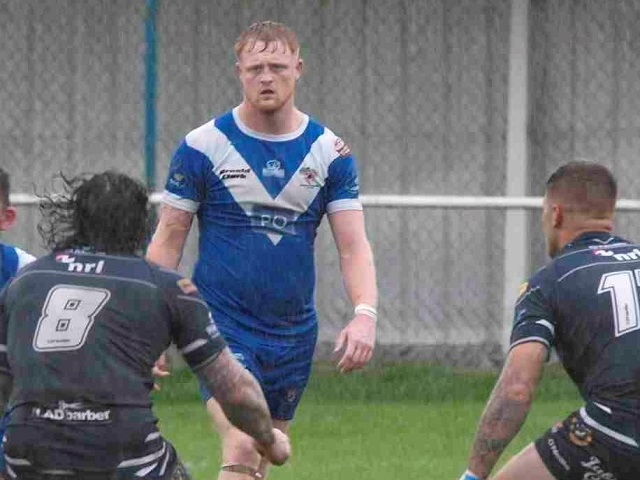 Luke Fowden returned to Mayfield for the game against Hunslet

Mayfield's poor run of form continued with another heavy defeat. This one at Hunslet on Saturday 16 July was one of their worst performances of the season and only the second time they have failed to score.

This could have been a different game, Hunslet were on the board after only two minutes after a well timed pass put the winger in the corner. Mayfield then had a good spell and played their best rugby of the afternoon. They were unlucky after an Aidy Gleeson break backed by Lewis Butterworth saw James McDaid go over out wide only for the ref to disallow the score.

Hunslet had a player sent to the bin and Mayfield picked up the pace looking to exploit the extra space. They were again unlucky as the ref disallowed another possible score and the Mayfield heads went down. Hunslet seemed to get the rub of the green and managed a converted try before half time, 10 - 0.

Mayfield were still in the game on paper, but any hope they had of getting back in it disappeared after the half time break. Within minutes of the restart Hunslet scored their third try after some weak Mayfield defence allowed them through.

From there Hunslet seemed to score at will, running in almost uncontested tries. Mayfield never really gave up but they just weren't strong enough, tough enough or smart enough. The blistering conditions made it hard as the heat sapped the energy from the players but Hunslet looked fitter and were quicker in everything they did.

There were a couple of bright spots for Mayfield as new signing David Mills made his debut and showed he will be a useful asset at the club. The returning Luke Fowden had a decent showing as well.

The Hunslet coaches gave the MOM to Harry Sheridan who was impressive at full back in his first full senior game, he was pushed close though by Danny Dean.