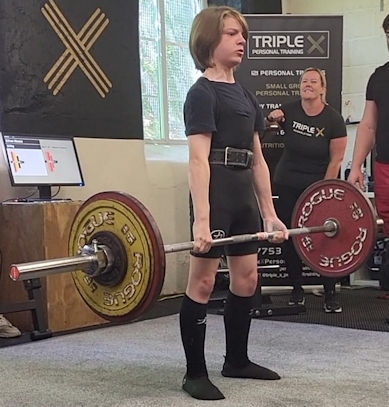 A 13-year-old boy from Rochdale has smashed all four North West powerlifting records in his first competition.

Ethan Moore started powerlifting last December after wanting to get stronger. The competition was the teenager’s first and was a novice one held on Sunday 10 July at Triple X powerlifting club in Stalybridge.

Ethan competed in the under 53kg category, the lightest one available, where he performed squats, bench presses and deadlifts. Ethan smashed all existing records for the moves, plus the total of his heaviest lifts.

Finally came the deadlift, with an existing record of 80kg. Ethan's first attempt was a new NW record of 82.5kg he increased the record to 100kg with his second lift. His final lift he successfully achieved 110kg – equivalent to lifting a 17st 4lb person off the floor.

The total is the highest lift in each category added together and the previous NW record was 172.5kg, Ethan's total was a new record at 232.5kg.

Ethan, who is coached by his grandad Ted Moore, a former two-time British champion and current champion of the North West records for 60-70-year-olds, said: "It was my first time competing so it was pretty exciting. It's nice knowing that I hold the current North West record. One day I would like to hold some British records.

"I don't think I could have done it without my coach and grandad, Ted Moore."