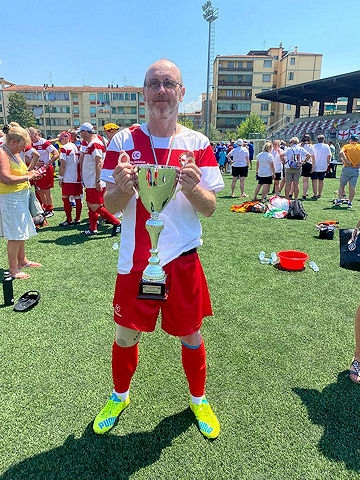 Dave Brooks with the cup

Dave Brooks, 64, who is semi-retired, was selected for the England squad after successful trials in Nottingham and Lincoln.

The England over 60s team won the championships after beating Sweden 5-0 in the semi-final in March and France 5-2 in the final, which was held in Florence earlier this month.

Dave used to play football when he was younger, which drew him to take up walking football, which aims to keep older people moving.

He started with sessions through Link4Life at Kingsway Leisure Centre before further sessions at Rochdale with “a handful” of people.

From there, they formed a club which played in competitions which became affiliated to Rochdale AFC in 2014.

The defender said: “I was happy to give walking football a go as I played football when I was younger.

“It was good to play for England. The sport is about getting older guys and girls up and moving, but it does grow on people and can get quite competitive.”

The Rochdale AFC Walking Football team was established in 2014 and has grown to incorporate various teams that cater for people based on age and ability.

Sessions take place across the borough with fixtures organised in the Greater Manchester Walking Football League.