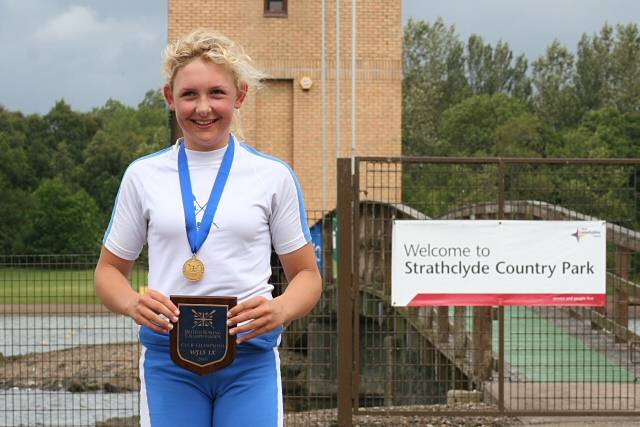 Hollingworth Lake Rowing Club had a weekend of success at the British Rowing Championships held at the international rowing centre at Strathclyde.

Eight crews entered various events, with 3 coming home with medals. Rowing on the Lake prepared them well for the blustery conditions they found in Scotland.

The many hours of hard training helped 17-year-old Andy Jepson take a bronze medal out of a field of 17 in the Open Junior 17 single scull category, whilst 18 year old Stuart Sykes took another bronze in the Open U23 double scull event with his crewmate Rory O’Sullivan from Evesham.

Top honours went to 15-year-old Jess Leyden from Todmorden who took on a field of 16 to take Gold in the Women’s Junior 15 single scull event. Miss Leyden made the most of the choppy conditions to win her heat easily, putting her straight into the final the following day. The final was just as choppy and a following wind helped Jess smash the Women’s J15 Championship record by 5 seconds, completing the 2000m course in 8min 19.59s and left her nearest opponent some 9 seconds in her wake.

This latest win finishes off a tremendous season for Miss Leyden which started with her winning the WJ14 event 12 months ago and then saw her win the Inter-Regional Junior regatta and the National Schools regatta earlier this season, and must surely put her at the top in of British sculling for her age group.

In their first races in a national event, Jade Dixon (WJ18 1x), Liz Moore (WJ17 1x), Chloe Farrar and Leanna Daniels (WJ16 2x) all made the reparcharge after their heats as did Reece Handley and Ross Lawton in the Open J18 2x all of which can only bode well for next year’s racing season.