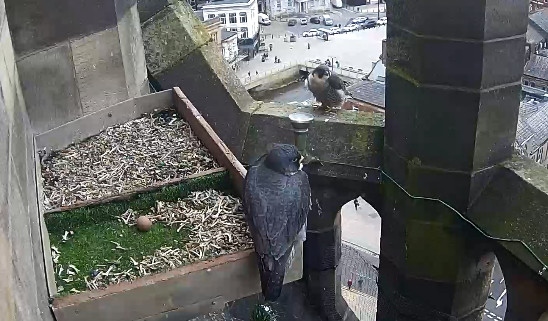 The nesting peregrine falcons with their first egg of 2019

The peregrine falcon which was found injured in Broadfield Park last week has sadly died.

The adult male of the pair which nest in the clock tower of Rochdale Town Hall was found by a local resident in the park last week with a broken bill.

Sadly, Rochdale Borough Council confirmed on Friday 28 June that the falcon died shortly before the operation by Wild Wings Birds of Prey to repair his broken bill.

A spokesperson for the council said: “It is thought the bird, a male adult believed to be around ten-years-old, had suffered a head injury. A vet will be carrying out a post-mortem later this week to find the exact cause of death.

“This year’s juveniles are all said to be doing well and are now flying and hunting. It is hoped the female will find a new partner, when the new breeding season approaches. A nature lover has been in touch and, after a weekend monitoring the falcon chicks, was delighted to report that the three juveniles seem to be thriving, eating well and becoming more independent by the day.

“We know how much nature lovers, not just across our borough, but throughout the UK and beyond, avidly follow the fortunes of the falcons living at Rochdale Town Hall, so we will of course keep you updated when we get further information.”

According to the London Peregrine Partnership, the average life expectancy is between 11 and 15 years of age, with the birds pairing for life.

However, if one of the pair dies, the surviving bird can accept a new mate.

Falcons have nested at the clock tower of the Grade-I listed Town Hall for more than a decade and are regularly seen soaring above the town centre as they hunt for food.

A live webcam tracks the birds’ progress as they raise their chicks at the top of the historic clock tower, reflecting the birds’ natural habitat to breed and hunt prey.