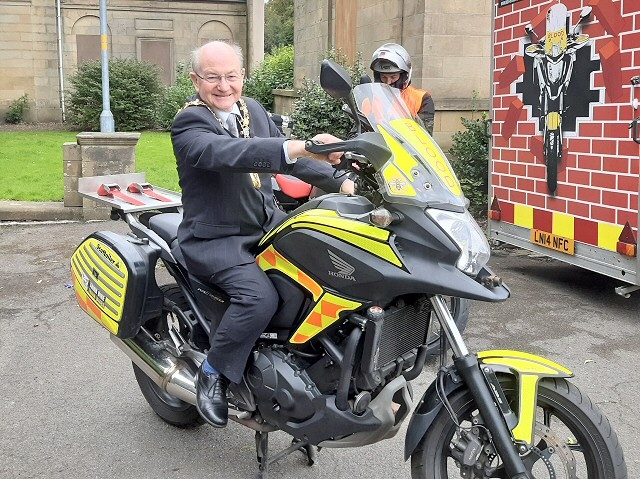 This weekly column from the Mayor of Rochdale, Councillor Billy Sheerin, is about the places he has been and the people he has met during the week commencing Monday 26 August to Sunday 1 September 2019.

Monday and Tuesday, I had no engagements.

Wednesday, I attended Gorton Monastery with all the mayors of Greater Manchester for the Queen’s Award for Voluntary Service. This is an annual prestigious event and I was delighted to see three groups from Rochdale receiving the honour, equivalent to that of an MBE: GEM Appeal, Heywood’s Little Monkeys and the voluntary sector of Springhill Hospice.

The Lord-Lieutenant of Greater Manchester came out with a statement at the event, describing how the voluntary sector saves the national economy £27billion per year. This says to me that if we didn’t have these wonderful people who volunteer, then the economy would grind to a halt.

Within the first five minutes, the all-stars Legends side were up by four goals! It was a great night.

Thursday, I presented certificates to all the volunteers who supported Deeplish Community Centre’s Summer Playscheme. The scheme hosts holiday sessions for children aged between five and 11, providing fun and physical activities during school holidays. More than 120 children and young people participated this year.

I was moved by the children’s participation and achievements and it was a privilege to thank the 25 volunteers for the work they have put in to benefit their community. 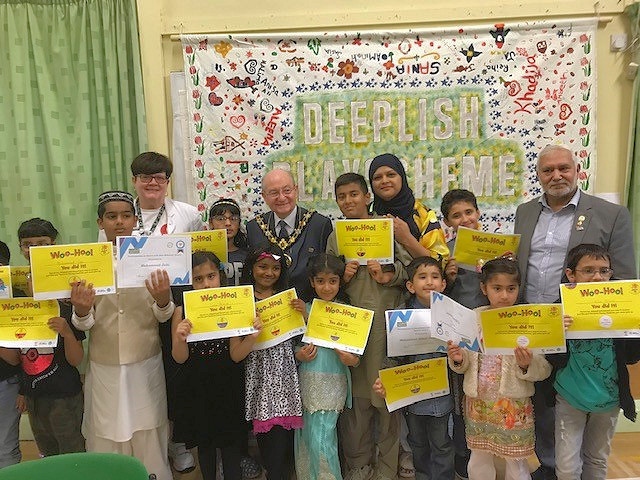 Friday, Petrus held a ‘thank you BBQ’ to show appreciation for the work their volunteers put into the Petrus’ Paradise garden shown at Tatton Park in July, which won a silver medal and a lot of admiration from the public. Tony Lloyd MP joined me, and we enjoyed lots of sandwiches and chips.

I met the Petrus volunteers and congratulated them once again on their achievement.

Friday evening, I went to meet an old friend – Colin Baker. Colin played the sixth Doctor in the television series Doctor Who from 1984 to 1986. Originally from Rochdale, we grew up and went to school together and were both members at The Curtain Theatre, so I was incredibly happy when he got in touch with me.

We met up at The Royal Toby, as he was on his way to a sci-fi convention, and it brought back so many memories from our early days. It was a very nostalgic evening for us both; he even signed a poster for my grandson who has watched every single episode of Doctor Who since it began.

Saturday, I was invited to Littleborough Coach House for the opening of Rochdale Photographic Society’s annual exhibition. Around 60 pictures are displayed on the walls, both digitally and in print, and will be until the 15 September with most of the items also available to purchase.

The quality of the pictures is absolutely outstanding and when I was asked to pick the best for the competition, it was almost impossible. I have always been keen on photography, so the skills these people have made me very envious... They asked me if I would like to join the society, but I don’t think my brownie eight camera would be up to the standard. 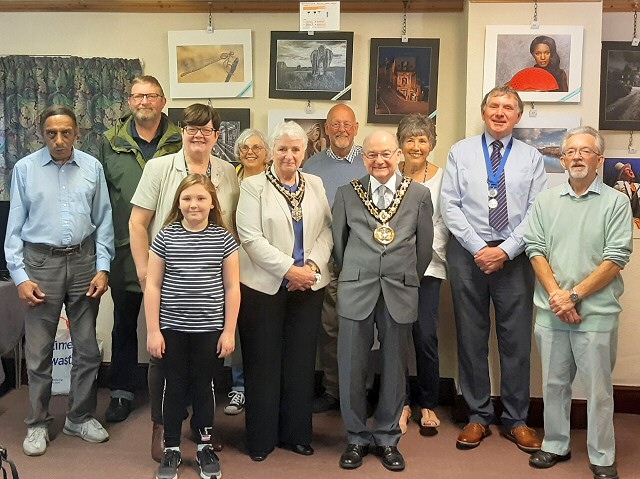 Organised by Wardle Academy students, I later attended a charity event at Littleborough Cricket Club for Cancer Research UK. The event was organised after one of the student’s grandparents had died from cancer, so they were keen to hold a fundraiser and contacted different local groups to get involved.

I have nothing but admiration for the youngsters for organising such a wonderful charity event for such a good cause. 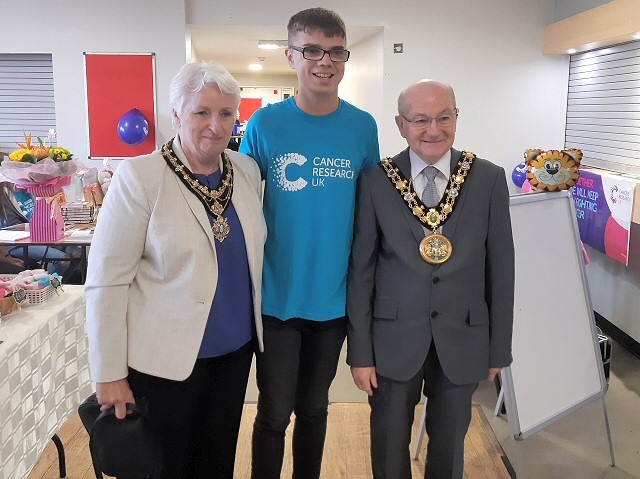 Sunday was a big day as Lynn (the mayoress) and I attended three events. We started the day with Sunday mass at St Joseph’s Church, Heywood as Father Daly and Father Michael are leaving. After mass, we had lunch in the parish centre where a hot meal is provided weekly for pensioners by people completing community service. It was a super meal, the greatest thing about it was these people really are serving a community purpose and helping the elderly.

Afternoon, we went to Heywood Charities Fete, beginning on Sefton Street before moving to Queen’s Park, which was very well supported with lots of colourful characters and floats involved under the theme ‘pop bands’.

Organised by the Heywood Charities Fete Committee, this traditionally takes place annually on the first Sunday in September and is supported by many local voluntary groups, organisations and local businesses. It provides a great opportunity to raise funds that are distributed between a number of charities throughout the upcoming year. The fete raised a total of £3,000 on the gates this year and the committee believes altogether the day raised £5,000.

Winner of the best float was Heykids with their Bugsy Malone theme and the best walking entry was Kats Dance Academy with Blue Rose Gifts. It was a pleasure to be there. 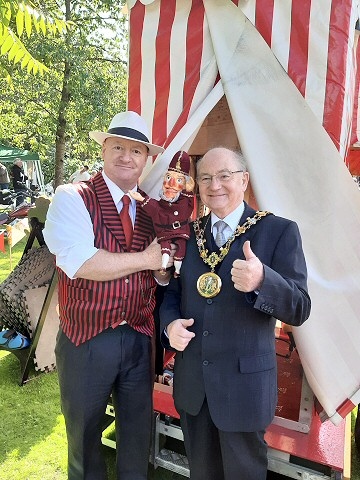 To finish the weekend, I went to Falinge Park for a Police Community Partnership Day. Stalls and entertainment were provided from a variety of services and organisations.

The Mayor’s Office even had our own stall selling burgers and other hot food, which raised £450 for the Mayor’s Charity Appeal. Thank you to all who purchased something from us – the money will go towards local worthy causes – and thank you to Salima, Pam Ashton, Michelle Hollinrake from Rochdale Shopmobility and Shahnaz for working the stall on the day.

Roch Valley Radio broadcast live at the event and I joined in with some Banga and Bollywood dancing, although I wasn’t the best.

I’m looking forward to the event being hosted again next year. 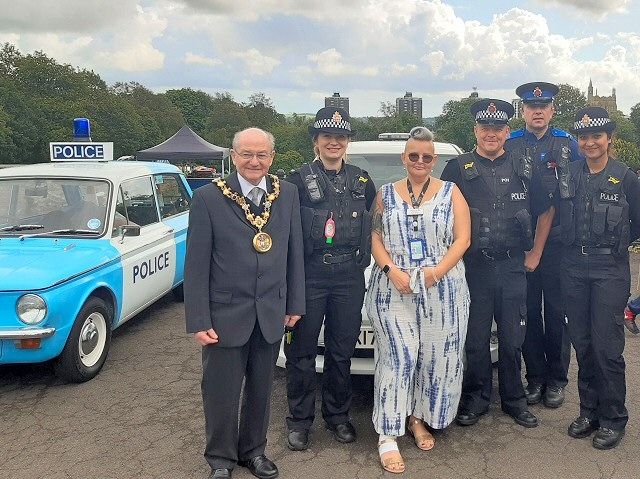