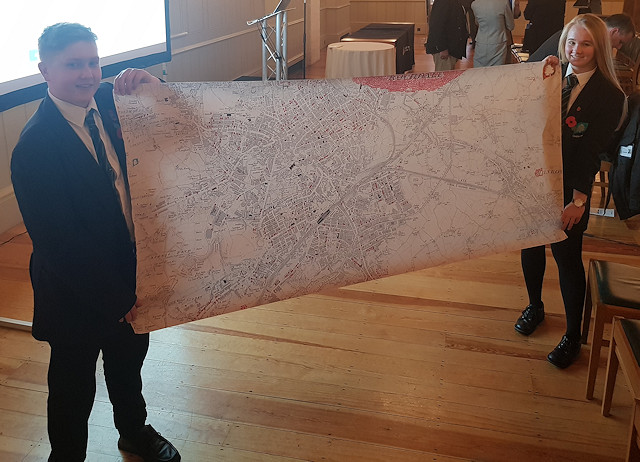 Jake Idiens and Jenna Holt created an award-wining project about World War One, consisting of a 1918 map of Rochdale with 1,486 poppies (seen here with a smaller version)

Pupils from Oulder Hill Community School will be laying a wreath in a special Armistice Day ceremony in London on Monday 11 November.

Last year, Year 11 students Jake Idiens and Jenna Holt created an award-wining project about World War One, consisting of a 1918 map of Rochdale with 1,486 poppies.

The project itself is 6 metres x 3 metres and covers the length of the wall in the pupil entrance at the school.

Each poppy was placed on the address of every Rochdale soldier who served in the Great War.

They will be joined at the Whitehall Cenotaph by Oulder Hill’s Head Boy and Head Girl, Bailey Boyd-Aust and Sarah Gore, laying a wreath at the ceremony on behalf of Oulder Hill.

They will be accompanied by staff members, Jessica Clarke and Danny Armitage.

Rebecca Tarran, Head of Humanities at Oulder Hill Community School, said: “The students were nominated by Simon Bendry from the First World War Centenary Battlefields Programme in conjunction with the Institute of Education.

“They have been invited by the Western Front Association and we are the most northern school to ever have this honour.”

Alongside Jenna, Jake, Bailey and Sarah will be Labour Corps representation from China, South Africa, Malta and the Caribbean.

A highlight of The Western Front Association’s ceremony will be a reading by Cerys Matthews of Dylan Thomas’ poem, ‘And death shall have no dominion’.

The Queen's Colour Squadron, from the RAF, will form the Vigil Party and the Last Post will be given by a bugler from the Grenadier Guards.

The theme of the ceremony is victory and peace as the war officially came to an end in June 1919 when the Treaty of Versailles was signed and this was followed by national peace celebrations across the United Kingdom in July.

Oulder Hill held a remembrance ceremony on 9 November 2018 where the project was unveiled by the Mayor of Rochdale and the President of the Rochdale branch of the British Royal Legion.

The school has since been granted honourary branch status by the RBL in recognition of the work they have done to commemorate World War One.

The students who were involved in the project are regularly invited to speak to local community groups and visitors regularly come to the school, just to see the map.

Plans for 2019 include developing an area of the school into a memorial garden.