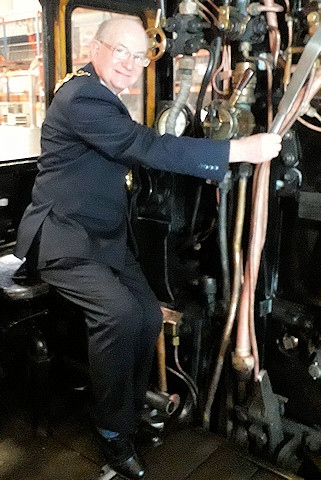 Mayor Billy Sheerin on board the cab of the Lancashire Fusilier engine at Riley & Son, Heywood

This weekly column from the Mayor of Rochdale, Councillor Billy Sheerin, is about the places he has been and the people he has met during the week commencing Monday 9 March to Sunday 15 March 2020.

It was an amazing way to start a very busy week off with a mayoral visit to Riley & Son in Heywood. Founded in 1992 in Bury, the business moved to Heywood in 2016. They are a railway locomotive engineering and refurbishment company and were made famous, both nationally and internationally, with the refurbishment of the Flying Scotsman.

I was made very welcome and, being a qualified engineer myself, thoroughly enjoyed the tour of the factory seeing the machine shop that had stood the test of time, still producing wonderful components for the renovation of trains.

The skilled workforce had my total admiration; long may they continue.

In the afternoon, I continued my visits to local engineering businesses with a tour around Farrel Ltd, Queensway, Castleton. For me this was a trip from my past as I started my apprenticeship in 1959 as a fitter at David Bridge & Sons company, which is now Farrel. The technical innovation that has transpired since those early days is quite amazing - to somewhat mind-blowing - with CNC machinery and robotics doing the jobs that in my day were done by skilled workers.

Farrel is the centre of the mixer division - the company was bought by Harburg-Freudenberger Maschinenbau in Germany and now continues its business operations as part of the HF Mixing Group in a multi-national group.

I was shown around by Philip Battersby, manufacturing manager, and Peter Rowe, customer services division manager, and we had interesting conversations on how things have changed and, in my view, for the better. I was able to address all the workforce of apprentices and hopefully inspire them to continue their careers in engineering, which is an extremely rewarding occupation.

During the last few years, I was assistant to the portfolio holder for Adult and Social Care, Iftikhar Ahmed, and one of my responsibilities was to chair the Learning Disabilities partnership board. When I was elected to be the next mayor, I promised the board that I would entertain them in the mayor’s parlour, and I fulfilled this promise on Tuesday. The team work boroughwide for the benefit of adults with learning disabilities and are really amazing people.

St Edward’s School were presented with a Green Flag award for being an eco-friendly school and I was invited to their presentation on Tuesday afternoon (10 March). The Eco-Schools Green Flag is an internationally recognised award for excellence in environmental action and learning.

It was rather a memorable occasion as this wasn’t their first green flag, but their 10th, so now they have been admitted to the green flag hall of fame.

St Edward’s is in my ward of Castleton, so it is always a delight to visit the school. I’m always made very welcome by all the staff and pupils and I’m always supported by St Edward’s in the community activities that we have in the village too; especially on the annual plant up of Castleton railway station.

It was the turn of the Lord Mayor of Manchester, Councillor Abid Chohan, to host a civic dinner on Tuesday evening. Most of the mayors have a civic ball to raise money for their charity but Abil, following tradition for the Lord Mayor of Manchester, just had a dinner. This was held in Manchester Central Library and could possibly be the last time the ten mayors of the local authorities get together due to the Coronavirus outbreak, which is rather sad, but the evening was still enjoyed by all.

Wednesday, I entertained a rather remarkable man in my parlour who came all the way from Swaziland. Headmaster of a primary school in Swaziland, Andrew Dlamini, was escorted by Bernard and Pauline Thompson from Rochdale who have adopted his school in South Africa and visit it every year around this time

It was interesting to hear how different the education of children is over there compared to how it is here, and it’s obvious how lucky we are to have the resources we do. Bernard and Pauline take books, t-shirts and uniforms for the children over there and I have nothing but absolute admiration for this wonderful couple.

I said thank you to children who access services at Rochdale Connections Trust who, during their half term break, raised money for my Mayor’s Charity Appeal. We sang songs, enjoyed food and had absolute fun. It was a delight to entertain them and to hear young people laughing in the mayor’s parlour really lifted my spirits.

The group sourced donations of sweets, chocolate, cakes and biscuits from a wide array of local traders and individuals who support the charity. During their half term holidays, they set about packaging the goodies up, adding their own positive messages on the tags used to seal the packs.

Friday was the Castleton Literary and Scientific Society 125th anniversary which was held at The Riverside restaurant at Hopwood Hall College. President of the society, Dr David Shreeve, welcomed me and we all enjoyed a delicious meal and anniversary cake.

The group usually meet in Castleton Community Centre every Friday. Thank you to them for inviting me to this celebration event; long may the society continue.

On Saturday (14 March) I was invited to St Thomas’s Church on Kirkholt for a celebration of seven years of Street Pastors. Similar to many mayoral events, prior to arrival, I was not quite sure of what the event was all about, but I discovered to my delight another group of volunteers that to me epitomise all that’s good and community spirited about the majority of people in our town.

Street pastors are a small, enthusiastic team, working on Kirkholt and down in our town centre. They are a registered charity and an interdenominational church group that respond to urban problems, engaging with people on the streets and in night-time venues to care, listen and offer practical help.

A typical evening starts with a team of three pastors who get a briefing from GMP and after a prayer they then begin their patrol. Typically, they help people who are being bullied, drunk or are in very vulnerable situations and do this with compassion and expertise. It was somewhat of a surprise that I learned that their interventions keep the crime rate down.

Two members of the group - Jean Briggs, who had completed 6 years as Coordinator and Richard Bradley, Vicar of Bamford Chapel who had completed 7 years chair of the Management team - were standing down and the event was to celebrate their achievements. It was my honour to present them with presents and flowers from the group in appreciation.

The Street Pastors are special people and they are also supported spiritually by Prayer Pastors. They all have the mayor’s admiration and support with God’s blessing.

In keeping with my intention to support all interfaith communities, on Sunday (15 March) I attended mass at the Polish Catholic Club on Manchester Road. The celebrant was Father Wojciech Swiatkowski and I was very warmly welcomed. I actually knew several members present, which is always a big help.

The Polish church and club was formed in the early 1950's by the polish people who came to Rochdale after the Second World War. When they arrived, they were given £1 by the government and had to find their own lodgings and work. They were hardworking people - most worked in the mills contributing greatly to the economy of Rochdale. They also had their own very successful football team and were always winning against other amateur Rochdale teams, playing mainly at Mandale Park.

Today, there are approximately 3,000 residents of Polish nationality together with descendants of the original settlers who are currently living in our borough. It’s really great to see them continuing with their own rich traditions.

They are another group that enhance the rich diversity in Rochdale.