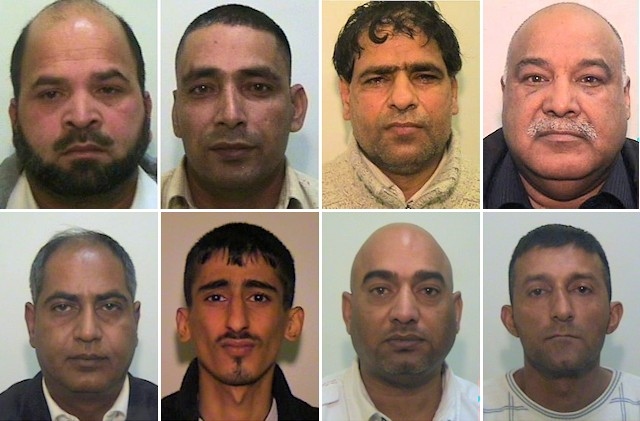 Eight members of the Rochdale grooming gang jailed in 2012

A paper to understand the characteristics of grooming gangs and help deliver justice for victims will be published by the government later this year.

The work was commissioned by the previous Home Secretary, Sajid Javid, to better understand the scale and nature of group-based child sexual exploitation, including the characteristics of offenders, victims and the context in which these crimes are committed.

The paper will outline the insights gained from this work and focus on how agencies can learn lessons from the past to tackle group-based offending and safeguard vulnerable children.

The Home Office will also set up an external reference group of experts to review the research before its publication.

Home Secretary Priti Patel said: “Victims of these sickening child sex abuse groups have told me how they were let down by the state in the name of political correctness.

“What happened to these children remains one of the biggest stains on our country’s conscience. It is shameful.

“I am determined to deliver justice for victims and ensure something like this can never happen again.”

Last September, the government announced an additional £30 million to take down the worst offenders and safeguard victims.

The Home Office will shortly publish the first of its kind cross-government Child Sexual Abuse Strategy to improve the UK’s response to tackling this abhorrent crime.

Responding to the news, Heywood and Middleton MP, Chris Clarkson said: “This is a welcome step to give a measure of justice to those so badly let down by a system that was supposed to protect them.

“The issue of group-based child sexual exploitation has been a stain on our community, and I welcome this robust approach to ridding our country of these vile crimes and ensuring that victims are to recover.”

Mr Clarkson recently urged Ms Patel to seek the deportation of three members of the Rochdale grooming gang, asking for them to be stripped of their British citizenship, echoing concerns from Rochdale MP Tony Lloyd, who has previously written to the Home Office, as well as writing to the Justice Secretary in 2020.

A fourth member of the group, Shabir Ahmed, also lost his appeal against deportation but is still in prison, serving a 22-year term for rape.

However, since then, none of the men appear to have been deported – or be facing deportation – with local residents having reported seeing them in town.

Speaking about the response received from the Justice Secretary in April 2020, Mr Lloyd said: "If I were one of the victims of the grooming gang, I would be furious at this response and I am furious on their behalf. I’m now requesting an urgent conversation with the Justice Secretary to see what steps can be taken to ensure these women do not have to live in fear of bumping into their attackers in their home town."

Addressing the government paper, Mr Lloyd said: “Whilst I’m bound to welcome the Home Secretary’s intention to publish the report, I’ve got no certainty that this is the report that the Home Office refused to publish back in February, which was strongly criticised by the House of Commons petition committee. Nor does the Home Secretary give any date as to when the report will be published, or what will be redacted from it. So I am bound to urge for the fullest disclosure and in the quickest time frame possible.

“Child sexual exploitation is a stain on British society and doing everything we can to ensure it doesn’t happen again in the future is the least we can do in recognition of what victims of sexual exploitation went through. I am also continuing to press the Home Secretary to ensure that those members of the Rochdale grooming gang, who to date have retained their British citizenship, are deported.”

Maggie Oliver, the former police officer turned whistleblower who worked on the Rochdale case, said: “I look forward to publication of this long awaited review, and I truly hope it is the beginning of a period of greater transparency from the government and an increased willingness to put resources into tackling these organised networks.

“The secrecy and apparent reluctance to address this issue as a country is nothing less than a national disgrace and has led to great mistrust of the whole system amongst the public.

“This needs to be addressed as a matter or urgency so that we can begin to restore trust in our criminal justice system.”