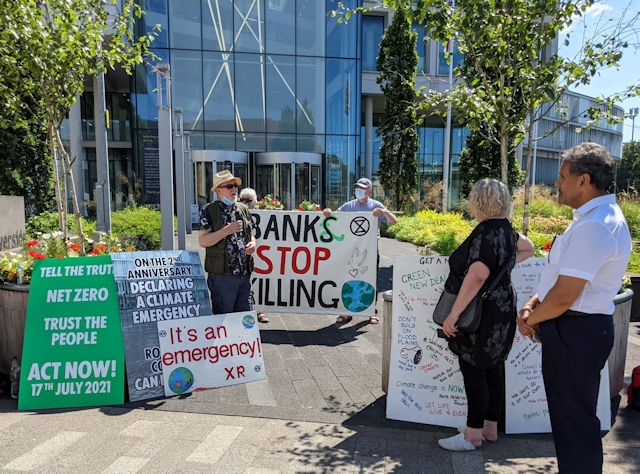 Members of Rochdale’s Extinction Rebellion group presented the council with a ‘birthday card' on Saturday 17 July, to mark the two years it has been since declaring a climate emergency, recognising that urgent action is needed if global warming is to be kept to a maximum of 1.5°C.

On 17 July 2019, councillors voted almost unanimously in favour of commitment to making the borough carbon-neutral – removing the same amount of carbon dioxide from the environment as it releases into it – by 2038, twelve years earlier than the target set by the government.

Inside, the card was filled with messages from residents of the borough, sharing their hopes, fears, suggestions, feedback, demands, and questions.

Rev Mark Coleman, a member of XR Rochdale, said: “We want to thank Councillor Sara Rowbotham and Councillor Shah Wazir for coming to receive the card on Saturday.

“We agree that climate change is an existential threat – it's a matter of life and death – certainly for those who suffer from floods in Europe or fire in the USA or extreme heat in Pakistan, but also a risk to the people in Rochdale.

“I hope the council will really take a lead now to inspire and inform the people of this borough so we can do all that we can to protect life.”

Rev Coleman hit the headlines in March for spray painting Chris Clarkson MP’s constituency office in protest over the ‘empty words’ from politicians on climate change.

He said it has been ‘disappointing to see so little action’, given the ‘big ambition and talk of a plan’ – that followed the climate emergency declaration.

The retired clergyman, who retired as Vicar of Rochdale last February, says there seems to be very little visibly happening in the borough.

He said: “We elect our councillors and MPs to keep us safe and make sure that society runs well and fairly. I don’t see evidence of significant action by the local authority to cut the emissions that are heating the climate.

“On the contrary there are new developments – roads, housing, industry – that will bring more emissions and increase the risk of flood here, and drought and extreme temperature elsewhere”.

“I know we have the Lime scooters on trial, but this sort of thing is potentially greenwash, it’s not the fundamentals of how much carbon is being emitted,” he told the Local Democray Reporting Service.

And while Rev Coleman understands that councillors are often confronted with more mundane, day-to-day issues ‘on the doorstep’ – he believes they can play a vital role in tackling the climate emergency.

“A local authority can create a vision for the borough and say ‘there are things we can do’.

They might not have all the powers and all the money’ but they can say ‘we want a Rochdale which is safe, where we can reduce the risk of big floods like we had in 2016, where we don’t see big fires on the moors like a few years ago and will work in a responsible way to cut emissions from cars in our borough’.” 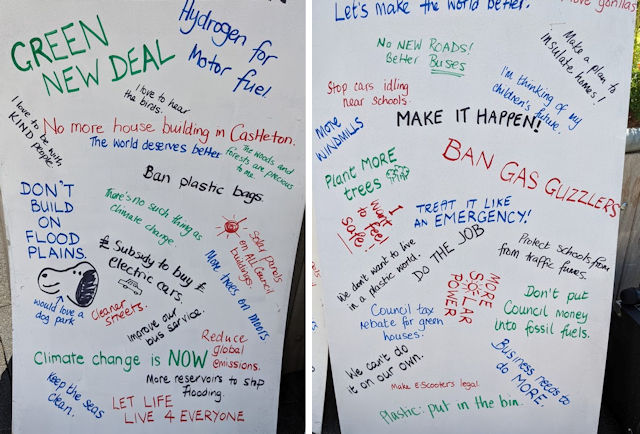 For Rev Coleman it is transport and housing that are the ‘big issues’ to be tackled – and the authorities must lead the way.

“It’s beholden for our government, both national and local to educate people and provide some hope through meaningful action.”

But to do this, he says will need a rethink from the councillors who voted to pursue and urgent green agenda back in 2019.

“The thing that depresses me is the way politicians are still treating this issue. It needs to get beyond the whole tribal political thing,” he said.

“They all agreed to the climate emergency, pretty much unanimously, but are not really working together.”

And he urged councillors to ‘step out of the old part politics and into something new’, if they want to make a real difference.

Responding, Councillor Sara Rowbotham MBE, the council’s cabinet member for climate change and responsibility, said: “Our climate change targets are ambitious because we know that without radical action we are not going to make a difference. Extinction Rebellion are right to hold organisations to account and I want to reassure them that we are doing everything we can to play a significant part in the response to this global emergency.

“We have already taken huge steps towards reducing our carbon footprint and we have many more things are that are being worked on. These include community energy programmes, more solar farms, decarbonisation schemes, planning initiatives, training for council officers and more help for residents.

“As the lead for this area I am meeting with local Extinction Rebellion representatives to go through our plans in greater detail and listening to their views.”

The 2015 flooding is the most calamitous flood in Rochdale's history, which saw a month’s rainfall in just a few hours.

A review of the 2015/16 winter floods in the UK by the Centre for Ecology and Hydrology said that a ‘real-time’ attribution study presented after the December 2015 flooding claimed the rainfall was made 40% more likely as a result of climate change resulting from human activity.

Since the Boxing Day floods, certain areas of the borough are prone to flooding whenever heavy rainfall occurs.

A UN report has also warned that the risk of catastrophic climate change – including extreme heat, drought and flooding – would significantly increase if temperatures rise beyond this point, adding that we could have just a few years left to limit a climate change catastrophe.