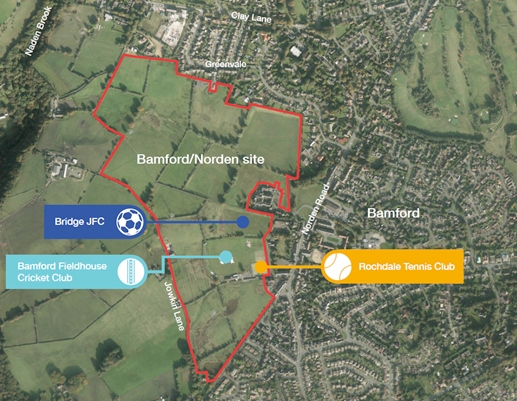 Aerial view of the site in Bamford/Norden showing the existing sports facilities.

A developer has unveiled plans for a ‘sports hub’ at a controversial green belt site earmarked for 450 new homes.

Property giant Peel wants to have a ‘community conversation’ on the recreation facilities it says lie ‘at the heart of its ambitions’ for the land in Bamford, Rochdale.

The plot, between Jowkin Lane and Norden Road, is earmarked for development in the Places for Everyone (PfE) plan – a joint development strategy with eight other Greater Manchester boroughs.

Formerly known as the GMSF, its proposed use of green belt remains highly contentious, but a final document is expected to be submitted to the government for approval early next year with a view to adoption in 2023.

Developers do not need to wait for ministers to give the blueprint the thumbs up, however. Barratt Homes has already submitted a planning application for 550 properties at Cowm Top – also in Rochdale – for example.

Read more: Controversial plans to build hundreds of new houses on a greenfield site in Rochdale have been submitted by a major developerPublished: 05 October 2021

While Peel has not yet lodged plans for the Bamford site, it has launched a public consultation on the sports and recreation element of its scheme.

Bamford is already well served by a cricket ground, tennis courts and football pitches – with the PfE plan stipulating that any proposal must ensure these are retained and ‘significantly enhanced’.

Peel says it is committed to working with local sports clubs, residents and community groups to understand how the area’s sporting offer can be best improved.

Jonathan England, the firm’s development director said: “We have a special opportunity to create a lasting legacy through the recreational and sports hub.

“By working closely with the local community, we aspire to build on the area’s sports, health and wellbeing provision and deliver a new hub to be enjoyed for generations to come.

“The recreational and sports element is a fundamental part of the wider plans for the Bamford/Norden site and we want to start an early conversation on what local people would like to see.”

He added: “So, whether you already use sports facilities in the area and have thoughts on how they could be enhanced, or have big ideas on what’s missing when it comes to sports, health or wellbeing provision, get in touch and have your say.”

The attempt at striking up a ‘community conversation’ has not been welcomed in all quarters, however.

Save Bamford Green Belt, for example, would rather see the plans permanently shelved.

John Knott, of the campaign group, said letters sent to residents by Peel were ‘causing unnecessary confusion and concern in the local community’.

“This land is green belt land and the Places for Everyone plans for Bamford / Norden have not yet gone in front of the independent planning inspector and may even not be approved,” he said.

“We have been approached by many in the local area who are asking if the final decision has already been made.

“Much of our opposition to the planned housing is due to the impact on the local environment, with many established walking routes, football pitches, cricket club and wildlife already providing benefit to people’s wellbeing in the area.

“Peel are asking what they can do to improve the area’s existing provision. Not building 450 houses on grade 3 agricultural greenbelt land would be a good start.”

The consultation runs until Wednesday, November 3. Residents can find out more and get involved by: