You are Here: Home » News » News Headlines » Couple restoring one of Middleton's oldest mills 'left with repair bill for tens of thousands of pounds' after fire destroys neighbouring building 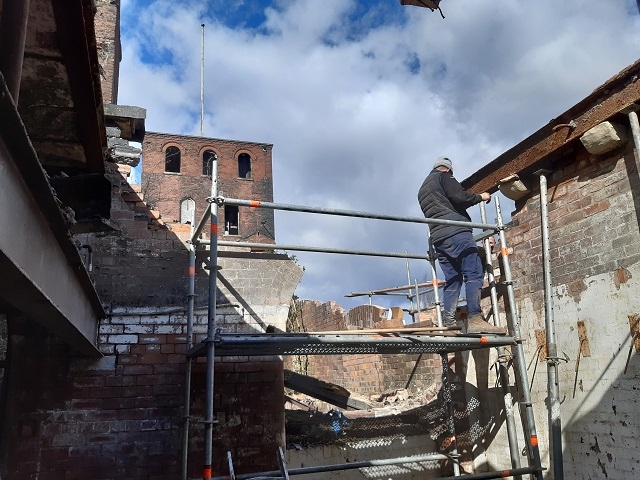 The Engine House at Lodge Mill, in Middleton

A couple who are restoring one of Middleton’s oldest mills say they have been left with a repair bill for tens of thousands of pounds after a fire destroyed the adjoining building.

Paula Hickey and Martin Cove, of Middleton, bought Lodge Mill on Townley Street in April 2019, and have been using their own funds to restore the building, opening an ice-cream shop on the ground floor and hosting numerous community events.

Unfortunately, arsonists set fire to the adjoining mill at the back of Lodge Mill on 30 December 2021, with demolition work being carried out by the council to make the ‘back mill’ safe.

Martin said: “We thought we had got off lightly with only the flooring being damaged in the Engine House attached to the front mill at Lodge [owned by Martin and Paula].”

He continued: “We were then hit by the devastating news that during the demolition work to make the back mill building safe, several tonnes of rubble had been dropped through the Engine House roof, causing extensive damage to this building that was being used as a vital community space in our town from providing small businesses a cheap venue to sell their wares to exercise classes and history-based fun events for all. “ 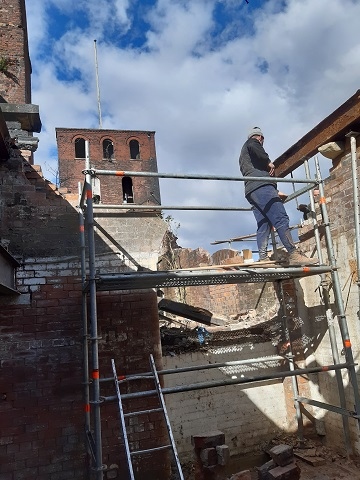 Martin and Paula say the repair bill could cost as much as £50,000 but are hoping to reduce this to a maximum of £30,000 by shouldering the majority of the work themselves, using recycled, upcycled and donated products and volunteers.

They say that the council and the demolition company have denied “any responsibility” to repair the damage, whilst the owner of the mill cannot be found.

“We’ve been told to sue the owner of the back mill, but no-one can find him. The fire has been ruled arson but the case has been closed,” Martin continued. “So far we have been using our own funds to carry out the necessary repairs, but we’re almost out of money.

“We desperately need the community’s help to get this venue back up and running.

“We managed to host a small community event in the building this Easter, and we’re so grateful it only rained a little bit because there’s still a massive hole in the roof.

“The small businesses and local crafter involved were very understanding.”

Paula added: “Please help us save this building and give whatever you can, no matter how small, to make this incredible venue a usable space once again.

“Lodge Mill needs all the help it can get.” 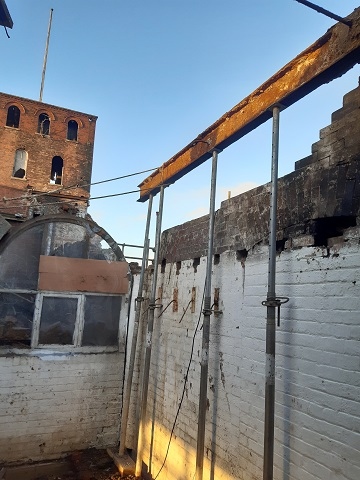 Rochdale council says it acted legitimately to remove the danger and protect the health and safety of the public.

A council spokesperson said: “The council acted legitimately to remove the danger and protect the health and safety of the public from an unstable and extensively structurally damaged building following a large fire.

“The building displayed structural defects that suggested ongoing movement/collapse was continuing after the fire had been extinguished, and the concern was that an uncontrolled collapse could occur spontaneously, which may affect the surrounding areas, including the adjacent low-level engine house building.

“Failure to attempt to safely demolish the remaining superstructure could have caused far more material damage to the adjacent buildings then that which was unintentionally caused during the demolition.

“At the time of incident, the council engaged the services of a demolition contractor (who was already present on site) to make the building safe, and the method of demolition was carried out in accordance with their own expertise, as a specialist contractor.

“The consequential damage caused to the adjacent building was a result of the extremely weak and unstable condition of the remaining mill super-structure and could not have been foreseen based on an appraisal of the building’s condition at the time.

“Whilst the incidental damage to the adjacent building is regrettable and unintended, the damage was ultimately caused as result of a fire, for which the council has no liability or responsibility for.

“To assist the owners, the council has arranged at no cost to them, for the demolition materials to be removed from within the damaged engine house building and we have offered for a structural engineer to be engaged to develop a temporary stability/strengthening solution for the damaged roof and walls.

“This will allow the structure to be made safe to allow repairs to be undertaken on the damaged sections of the structure.

“The owners have engaged a solicitor in this regard and have made representation to the council and specialist contractor, which are presently being responded to.”

Lodge Mill was built in the mid-1800s and was originally a silk weaving mill. It went on to cotton weaving and cloth dying, then to a home for many different small local businesses. Sadly, in the early 2000s, it fell into disrepair and became derelict.

Donations to the fundraising appeal can be made via GoFundMe.