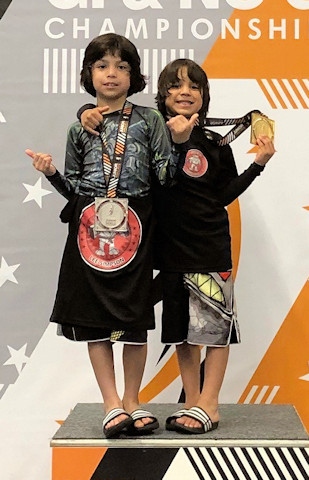 Two brothers from Rochdale earned podium positions and medals at the 2019 BJJ Junior World Championships in Wolverhampton on Sunday 21 July.

Andrew, a grey belt, has been training since 2016 and has been active on the UK’s BJJ competition circuit since 2018.

The weekend’s competition was the world championship debut for his younger brother, Collin Perez, seven, who holds a white belt.

Collin landed a gold in the under 27kg weight category after smashing all his fights. He has been training for just over a year, and has only been competing in the sport since December 2018.

Both Andrew and Collin have raked in the medals after quickly showing talent just months after taking up the sport.

Both boys train at Team Sukata in Warrington, with their achievements helping their club to second place on Sunday, narrowly missing out on the first-place position by 41 points.

Team Sukata won two team trophies and a staggering 48 medals on the day, including those won by the Perez brothers, who also train judo at Bacup Judo Club.

The BJJ Junior World Championships in Wolverhampton is the largest junior Brazilian Jiujitsu Tournament held in the UK with over 1,600 competitors from around the world taking part.

The Perez brothers’ next competition will be the BJJ Junior European Championships on 21 and 22 September.