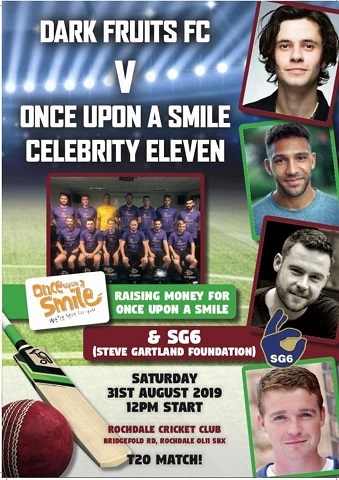 A T20 charity cricket match is taking place at Rochdale Cricket Club on Saturday 31 August in aid of the Steve Gartland Foundation and Once Upon A Smile.

Ian Kershaw from Mayfield said: “The aim of the game is to raise awareness and funds for two charities, The Steve Gartland Foundation which supports mental health and well-being and the Once Upon A Smile Bereavement Charity.

“The betting suggests a close game with my money on a Ben Stokes like performance from Aidy Gleeson to clinch the match and entertain the expected bumper crowd.

“As if that's not enough there will be bouncy castles, an inflatable football shout-out, face painting, hot and cold food, and for those who fancy themselves a dab hand with the bat there will be a speed bowling machine.

“There is also live music throughout the day and a half time set from legendary DJ and Revolution presenter Dave Sweetmore.

“Admission for all this is just £4 for adults and £1 for children. Doors open on Saturday 31 August at 11.15am and the entertainment goes on til late.”