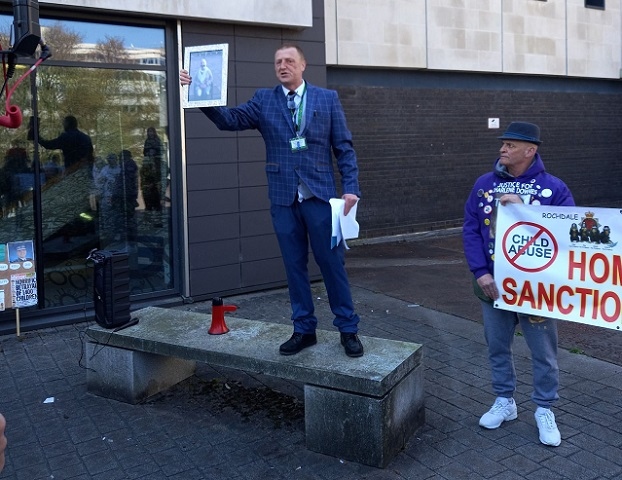 A demonstration to 'protect our kids' took place in Rochdale town centre on Saturday 24 April.

The protest, led by Parents Against Grooming UK, comes after it was revealed that convicted paedophiles Abdul Aziz, Adil Khan and Qari Abdul Rauf still live in Rochdale, nearly three years after they lost an appeal against being deported.

William Howarth, who founded the group, said: “We are a voice for survivors. This [the trio living locally] is retraumatising to all the children involved.”

The group, which included survivors and supporters, met at the cenotaph in Rochdale town centre with placards and banners before marching to Rochdale police station. Once outside the police station, a rallying cry of "What do we want?" "Justice!" "When do we want it?" "Now!" came from the protestors before a chant of "Do your job."

Mr Howarth gave a speech, where he also paid tribute to the late Linda Phillips, who had volunteered for the cause: "I’d like to thank each and every one of you for attending and showing your support in our fight to protect our children. I’d like to thank all of my team; without you and your dedication and loyalty could we help so many survivors.

“We will not give up until these monsters have been deported. We protest here today outside the building behind me, GMP Rochdale division station. We stand here today, not because we misunderstand the process of deportation. We are fully aware this decision sits with the Home Office. Our march on justice will take us there.” 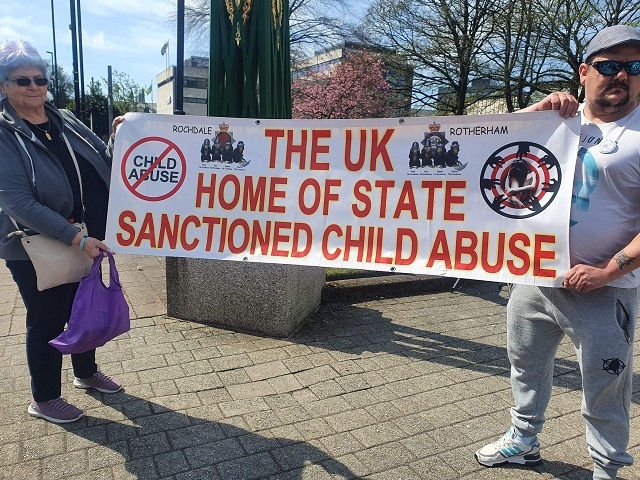 Mr Howarth also read out a statement from Women Against Groomers - WAG - which last year demanded legal action against the Home Secretary, Priti Patel, for failing to deport the paedophiles.

He explained they were gathering outside the police station due to the historical sexual abuse of children at Knowl View residential school, when Cyril Smith was a governor.

Despite a long-held view of a cover up by the authorities, including the council and police, an independent inquiry in 2018 ruled that although there 'was no deliberate attempt to cover up abuse', there was however, 'a careless and wholly inadequate response'.

Mr Howarth then spoke about other convicted paedophiles who are living in the borough, adding: “I could speak about so many other offenders in this way, how they were allowed to return to Rochdale unaided, unpoliced and free to strike again. We’re not here to protest against deportation today, we’ll take that to the Home Office itself.

“We’re here to protest against the continued attitude and failure to protect children and survivors. I ask you to stand with me as we begin a journey together for the right to protect our kids."

The Parents Against Grooming UK group, based in Rochdale, decided to hold the protest 'because of the lack of policing and establishment ignorance to convicted paedophiles returning to the borough'.

The group claims the three members of the grooming gang have been allowed to breach their sexual prevention orders.

In 2012, all three were convicted of conspiracy to engage in sexual activity with a child and trafficking a child within the UK and sentenced to between six and nine years in prison.

Khan and Rauf have since launched another appeal to remain in the UK, according to The Sun.

Parents Against Grooming UK has also launched a petition, calling for an automatic 30 mile restraining order for those convicted of sexual abuse, and intends to hold a forthcoming protest at the Greater Manchester Combined Authority and the Metro Mayor's office.