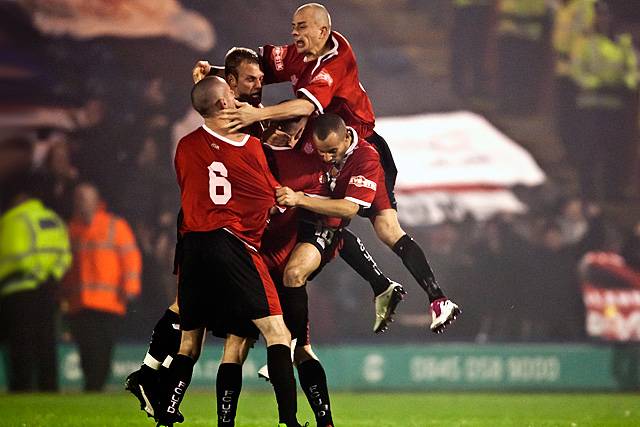 Rochdale crashed out of the FA Cup at the first hurdle after going down 3-2 to non-league FC United of Manchester after a controversial injury time winner.

The part timers stunned the Spotland faithful after going 2-0 up through Nicky Platt and Jake Cotterell early in the second half but Dale levelled matters through Anthony Elding and Craig Dawson.

With the tie heading towards a replay, referee Eltringham took centre stage when he failed to spot that FC’s Mike Norton kicked the ball out of the hands of Dale keeper Josh Lillis before slotting home the winner.

Keith Hill made one change to the side that started the abandoned game against Oldham on Tuesday, on loan Tom Kennedy wasn’t given permission to play by parent club Leicester City so Joe Widdowson getting the nod.

The Manchester part timers are five divisions below their full time Rochdale counterparts but showed from the first whistle that they meant business. Dale were afforded no time on the ball with the Red Rebels closing them down quickly.

Dale started very brightly  forcing FCUM to defend from the off.

Inside the first minute Jason Kennedy beat three men before rounding the keeper but found his shot blocked.

Just moments later came the first controversial decision by referee Eltringham. A Barry-Murphy corner was hooked back into the danger area and with Karl Munroe appearing to handle there were huge appeals from the supporters and the Dale players but the official waved play on.

Backed by over 3,500 supporters, the FCUM looked dangerous on the counter attack and their first attempt at Lillis’ goal came seven minutes in when Jerome Wright’s first time effort looped over.

The Spotland surface has been the talking point of the past 72 hours, after the midweek derby versus Oldham was abandoned due to a waterlogged pitch, but the playing surface looked in pristine condition. Rain for three hours prior to kick off meant the surface had an extra zip, with many players falling foul of the slippery conditions.

FCUM’s Battersby was almost made to pay when Adams stole the ball after the visiting full back slipped but Adams chipped shot went across the face of goal.

FCUM seemed to grow in confidence the longer the game went on, with their hero from the last round, Carlos Roca, trying his luck from distance.

Nicky Adams tried his luck after making room for himself but his effort drifted across the face of goal.

Captain Gary Jones’ teasing cross was inches away from Elding and O’Grady.

The visitors certainly had their chances with Deegan curling an effort at Lillis with  stopper gathering at the second attempt with Norton loitering.

Dale's best chance of the half fell to Elding seven minutes from the interval. A Gary Jones clearance from the back found Adams down the right, who unselfishly found Elding but he tried to be too clever and fluffed his shot when he really should have done better.

That miss was to prove costly as three minutes before the interval FCUM took the lead. The lively Jerome Wright played a delightful through ball for Nicky Platt to race onto and finish with aplomb by chipping Lillis to send the visiting hoards into ecstasy.

At half time the Dale boss must have had strong words with his team as they looked to get an early response as the second half started, but the visitors struck a hammer blow as they doubled their lead. Good work by Deegan down the left worked the ball to Norton who in turn laid off to Cotterell who from 25 yards hit an unstoppable drive beyond Lillis for 2-0.

The Spotland faithful looked shell-shocked, as did the players, but they responded well and within four minutes had halved the deficit. O’Grady drew an unecessary foul on the edge of the box which Barry-Murphy floated into the box, where Elding was on hand to turn the ball home from close range.

That goal coupled with the introduction of Akpa-Akpro gave Dale new belief.

Akpa-Akpro had a header flash wide whilst Jones had an effort blocked.

Akpa-Akpro again made space down the right but O’Grady couldn’t find the finishing touch to his cross.

Hill’s men certainly had the bit between their teeth as they looked to get back on level terms.

O’Grady had an effort blocked whilst Elding's effort was deflected up into the air and saved.

Ashton again had to be alert when Dawson saw his header saved.

The Dale pressure looked to be ending in vain until Dawson leaped for a Barry-Murphy corner and the big centre half powered a header beyond Ashton to level the score.

As the clock ticked down, Akpa-Akpro and O’Grady had shots saved as the game looked to be heading for a replay at Gigg Lane. That was until FCUM made one final break. A ball through to Norton seemed to be gathered by Lillis but somehow the ball wriggled free with Norton gleefully knocking in the loose ball to win the tie and send the part timers through to the second round.

The Rochdale keeper and defence surrounded the referee as they felt that Lillis had two hands on the ball when Wright kicked it from his grasp, but the goal stood and the Red Rebels had created history.

The question oneveryone’s lips after the game was the third goal that TV replays showed backed up the Dale players claims that Lillis had been fouled.

"Probably the only game this season that we have been favourites to win and perhaps the players have got to handle that a bit better.

"I’m disappointed but tomorrow I will recover from it, there’s no position in the league at stake.

"Our fans have got a right to be disappointed, they do expect us to win these matches and perhaps we should be.

"The club is going in the right direction and won’t be affected by this one result.

"It was a difficult challenge for us tonight but one we thought we were more than up to.

"The lads are deeply disappointed and it’s difficult when these celebrations are going on around you but we have been there ourselves.

"I don’t think anyone who is a neutral should be happy with that decision at the end because referees are getting a bad mark against their names at the minute. He has got it wrong, as did the referee in the game involving Manchester United when Nani scored. Josh Lillis had two hands on the ball and I suppose it’s not good etiquette what their lad did but I fully understand it; I don’t endorse it but he has got away with it and he has scored a goal from it.

"It’s sad from our point of view and I understand why they are celebrating.

"It would be nice if the referee admitted that he got it wrong but his vision was probably impaired a little bit but he has got the decision wrong and the goal stands.

"I thought the atmosphere was electric and they probably deserve to be going through but again we have been done by a refereeing decision and I consider that to be a bad decision.

"There are no sour grapes here, I wish Karl and FC United all the best and they deserve to be celebrating but the decision is fundamentally wrong.”